I’ve been thinking about Christmas’ past. There were so many wonderful ones. There were also some bad ones sprinkled along the way. This year has been a joy for me because I was able to do at least a little something for everyone.

I got the boys all nice digital frames so I can share the past with them. This was important to me because they have been separated from most of our family all their lives. At least this way they will have the memories of their younger lives and the history of our family.

One of my favorite Christmas memories was when I was seven. My younger brothers and I lived with our grandfather and Aunt Rose. They raised hay and had a dairy farm. The house had no electricity, running water, phone or indoor plumbing. It was near Savage, Montana, so an old farmhouse with no insulation and only a coal-burning cook stove and heating stove in the living room meant the nights were danged cold.

When Dad took us out there, and we spent a lot of time going back and forth, I loved seeing the light of home. We always arrived after dark and I saw the kerosene lamp in the kitchen window long before we drove into the yard. That golden light in the darkness was a welcome sign. I was home again.

I slept with Aunt Rose in a lower bedroom behind the kitchen. For all the cold, it was the warmest home I knew. Rose and I got down on our knees beside the bed and said our prayers. Mother had written out the Lord’s Prayer for me so I could read it until I had it memorized. Then I went through the blessings on everyone and everything I loved. There were some nights I wished I didn’t love quite so many people and animals.

At last we crawled into bed and Rose put her arm under my neck and pulled me close to warm me. Between our flannel pajamas, flannel sheets and several very heavy quilts, we managed to get warm. I sometimes wondered if I would be able to breathe under all those quilts.

Mom and Dad decided to surprise us one Christmas and come out to see us together. Mother was always a beautiful woman. She had been asked to go to Hollywood to screen test by two different producers. She never looked more beautiful than she did that night. She wore a bright red coat with large, black buttons. Her lips matched the scarlet coat and her deep blue eyes twinkled with happiness. Dad wore a hat, as usual, and that familiar, lopsided grin.

Mother’s coat wriggled and she pulled a Collie puppy who looked just like a fluffy little Lassie. We were thrilled with the puppy. I learned later Mother had been crying because she couldn’t do much for us kids. The cook at the nightclub where she worked was a little Chinese man who adored her. He went out and bought a purebred Collie for her to give to us. Grandpa and Aunt Rose already had a Collie named Laddie, but this was a puppy and she was ours.

Stevie got a train. Dad set it up in the middle of the kitchen floor in front of the cook stove and I got a doll and a cradle.

Mom and Dad never were very good about working together on anything and the Christmas gifts were no different. One of them bought the cradle and the other bought the doll. She is tall, yes, I still have her, and has eyes that open and close. She was supposed to be a walking doll, but I never figured that out as I had to move each leg to make her walk and that was far too much trouble. Her name was Debbie. She joined my old cloth body doll that slept with me and went just about everywhere I did. Debbie was too big and Aunt Rose wouldn’t let me put her in bed also. Besides, she had her own bed.

Debbie’s cradle, however, was it was far to short for her. I fretted constantly because she would have a kink in her neck if I propped her up in the cradle. Debbie slept with her legs up over the end of the cradle and that had to be cold since she was a city girl with a frilly little dress.

I made sure each night she was well-swaddled in blankets so she wouldn’t freeze. Aunt Rose was kind enough the make me some blankets out of scraps.

As soon as I finished my prayers I bailed into bed right behind Aunt Rose and snuggled up to get warm. Some nights, I forgot to cover Debbie up. Invariably, I argued with myself about whether to get out of the bed to cover her up or not.

What if you were a doll and your little girl didn’t cover you up?

Guilt works on me and always did. I jumped back out of bed and raced across the freezing cold floor, wrapped her up tightly in her blankets and dashed back to bed. Aunt Rose never thought I was stupid.

I still have those dolls, mainly because Aunt Rose kept them. We moved so much very few of my things from childhood survived. Thankfully, Rose, like me, was a pack rat.

That was our best Christmas for many reasons. We were all together. Mom and Dad, Stevie, Gary, Aunt Rose, Grandpa and me. It was the last Christmas we would all be together. Stevie died the following June two weeks before he turned six.

Years later, I once again argued with myself about a tiny blanket. When Mirinda died, I insisted she had to have a blanket to keep her warm. Insane I know. Dead babies and dolls don’t get cold and they can never be warm.

Will helped me pick out a tree this year. It was very full at the bottom so I had to cut quite a few limbs off. I decided to keep them and make a grave blanket for Mirinda this year instead of the usual vase arrangement.

I added a light to it. I’m sure the groundskeepers will remove it, but perhaps it will shine for a little while for her. 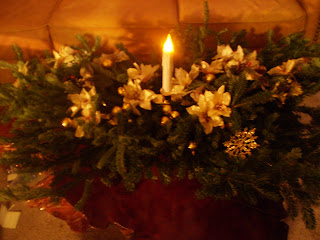 While this seems like a maudlin meandering, it is really a recant of my blessings.

I have had one of the best Christmas’ ever. Will is home safe and sound. After the disaster that occurred on his leave, I was terrified something would happen to him. He has permanent custody of the baby. Logan was my second worry, but he is safe and surrounded by love. He adores Don, my ex-husband, almost as much as Don loves him. Will is an exceptional daddy. Logan loves him dearly. It’s amazing to watch them together. Of course, Logan gets called Dude so much, he may one day think that’s his name. Logie Bear is also popular, but I think he’ll grow out of that one.

My children are all healthy. My soldier returned safe and sound. Although there were some injuries in the unit, there were no losses. What a tremendous blessing that is. Thank You, Lord.

My grandchildren are healthy and happy. Another blessing.

There are so many parents who are going through Christmas without their soldiers. They are separated from them and think daily of them. Their prayers for safety rise. Most will return home safely. For some, they will never celebrate another Christmas with their loved ones. For others, their lives will forever be changed by injuries.

A friend on Twitter gave me an address so I can start sending out care packages again. I’m thankful for that. It’s a small thing to send out cookies once a week, but it’s something I can do to feel useful.

I also found a charity called Soldier’s Angels that has soldiers for adoption. Another one of their programs is blankets for wounded soldiers. Once again, the comfort of a blanket. I haven’t sewn for a long time, but this is as good a reason as I can think of to start.

Isn’t God good to show us paths we didn’t even know were there?

Merry Christmas to my friends who celebrate it and happy holidays to those who don’t.