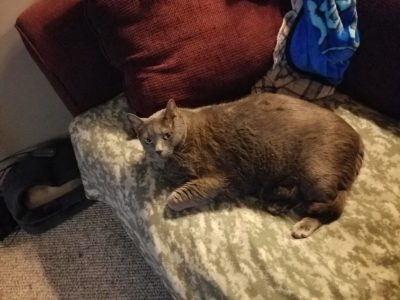 Instead of my normal stuff. I decided to write a PSA about how to adopt a cat and we all know you should if you can. If not a cat a dog. Or, in the case of our local shelter, two turtles. Support your local animal shelter.

So there I was, thinking about getting a cat. The landlord had those cute little electronic things plugged into the outlets to repel mice and bugs, but I was convinced critters get immune to them. Not only do they get immune, but after a while they call their buddies and dance to the vibrating, electronic beat. The helpful landlord had also put out some poison in the barn. The unhelpful mouse decided to come in the house and die under the bathroom vanity where he could only be reached by tearing the whole thing out.

Revenge in its highest form.

Buddy was a perfect fit and that cat has always been Will’s. Through wives, and mother, and kids, and friends, he is only interested in one person. Other people he tolerates. I cared for Buddy and he did get to like me, but that’s when Will was deployed, so the poor cat was desperate and had to settle. As soon as Will returned, I was chopped liver again. I’m surprised Will let me keep his cat considering the dragon eel fish adventure, but Buddy survived and all is well. Except for the dragon eel.

After three weeks of sleeping on the couch, the furthest point from the stinking mouse, I was ready for a cat. Maybe two. Off I hie to the Stillwater, Oklahoma animal shelter to look at cats. Kittens are awesome, but let’s face it, they have no problem getting adopted. I’m going to adopt an older cat that might not be homed as quickly even though this is a no-kill shelter. I decide to do as my son did when he got his cat. He went through the shelter looking for a kitten. Then a older Russian Blue saw him, sauntered over and put his paw on the cage door in a Hi-you’re-mine sort of way.

Anyway, I digress, I was going to let a cat choose me. With any luck, it would also be a good mouser. We’ll have a discussion about me and luck one day. It won’t be a long discussion because that wench is a stranger to me.

When you adopt an animal, be responsible. Buy the necessities. In my case, a nice litter box with a cover, sifting tray, scooper, litter, food, toys, dishes. I remember fondly how Buddy played fetch with his balls and put the red one in the food bowl and the blue one in the water bowl when he was done playing fetch. I knew I’d never find a cat like that, but one who liked to play would be nice.

I strolled through the shelter and picked up one cat and another. There were several kittens. Ooooooh, kitten! No, stay focused. I’d like to get a black cat because a lot of people in the southwest are superstitious about them and they can be harder to adopt. None of the black cats were interested in me in the least. Rejected! By a cat!

At last, there he was. He was large and older and gray and white and came up to the door and looked right at me. Yup, close enough for me. In hind sight, he probably thought it was feeding time, but I’ll take my signs where I can get them.

The attendant opened the door and pulled him out. He curled up in my arms and looked up at me with huge golden eyes. “Okay, Bud, we’re going home.”

On a whim, I decided to look at dogs. I swore I’d never get another dog after I put my last Aussie down and have stuck to that promise easily. We raised Aussies for years, but Badger was the straw that broke my heart when it comes to dogs. No more.

I’ll look anyway because I like dogs and my son is looking for a dog to work his bucking bulls. Oooooooh, puppies! Oh, such a sweet old dog over there. Yeah, I need to get out of here. Huh, Aussie.

“Cody, I’m at the shelter looking for a cat and I found a dog.”

“Have you been drinking?”

“Red merle. Too much white.” I knew he was a defective merle gene Aussie, but they aren’t always impaired.

“Take a picture of him. Think he’ll work stock?”

“No idea, but he’s standing up in the door. He wants to go home. You need him.” I took pictures of him and sent to Cody.

“Yep, adopt him and I’ll pay you back. I’m out of town now, but I’ll be back Wednesday.”

I told the lady I’ll take Gage the dog and George the cat. Since they’re going to be living in the same house for a while, I asked to introduce them and make sure they’d get along. It’s a good idea when acquiring a new pet to make sure everyone’s going to get along. Will discovered that with Buddy. His older cat hated Buddy and it was miserable to the point they had to be split up. I was going to avoid problems by making sure before I loaded them up. Gage was thrilled to be out of his pen. “Oh my gosh! Oh my gosh! Oh my gosh! I’m going for walkies!

The attendant took him out of the cage. “Hey, George,” I said. “Look, I found you a new friend.”

Gage was even more thrilled. A new friend! His little butt wiggled ninety to nothing. If you’ve ever seen an Aussie, you know what I mean.

George, on the other hand said, “Oh, hell no.” He clawed his way up my chest and launched back into the safety of his cage like a rocket.

Huh, rejected again. “My son’s going to get the dog on Wednesday. Can you hold George until then?”

It was Monday and they were happy that Gage was going to a good home with lots of room to run. No problem.

Home we go with a quick stop to get dog food because I’m a good dog parent. I have dishes, though I’ll probably have to wish them thoroughly to get the dog cooties off before George will eat out of them. We’ll cross that bridge later.

Since I lived in the country with just a few neighbors down my little side road, I turned Gage loose to run around. He loved his new home. “Don’t get too comfortable, Bud. You’re only temporary. I’m going back for George the cat.”

Gage spotted a gopher and began digging madly like a demonic trenching machine. Dirt flew in the air, a red plume of Oklahoma clay. Every now and then his head popped up to see if the gopher came out and then he continued trenching, the only thing visible one small bit of his white butt.

“Get a new dog?” Nancy asked. She strolled down from her house two doors down, which in city parlance is about a block away. At her side was a massive Rhodesian Ridgeback we named Millie. Someone abandoned her and Millie wandered from place to place where everyone put out food and water for her, but she’s most attached to Nancy and the college kids in the last place on the road.

“Nope. I got a cat. His name is George. Gage is for my son, but the cat didn’t like him, so I’m keeping him a few days.”

We drank sweet tea and visited on the porch. “Looks like he gave up on his gopher ditch.”

“Probably tired. That ditch must be eight feet long. Nope. He just spotted another one.”

The dirt started flying again. Millie thumped her tail heavily against the porch. She’s mildly interested, but not enough to help. That may say something to her age or intelligence. Gage might be lacking in both.

Nancy lived next to the college kids. They’re good kids, but they liked to party and since we were to hell and gone in the country, that was the place to party. On party night they had elaborate flashing lights showing the route all the way from the highway and it’s several miles. The flashing lights look suspiciously like highway construction markers, but no one says anything and the sheriff and ambulance have been out a few times. Nothing serious, just hold my beer stuff. Who knew college kids can’t really fly and those guys on the bottom can’t really catch you when you jump off the top of the house?

Well, I guess they do now.

“Reckon what’s going to happen when one of those drunks falls in a ditch?” Nancy said and poured more tea.

“I’m sure they’ll find him in the morning.”

Gage gave up after a couple of hours and trotted back to the house, happy and filthy. I brushed him out and let him back in the house. Cody showed up on Wednesday to get his dog and I loaded up to go get George the cat. I have litter in the pan. Food open. Toys open. We’re ready.

Cody walked in and sat on the arm of the couch visiting with me. Gage said hello to Cody and then plopped his butt down and stared at me. He’s noticed me putting my phone in my purse and that means I’m going somewhere. Oh, boy. Maybe he’s going for a ride!

Cody yelled. Gage sat, staring at me, wondering when we’re going. “Yup. He’s deaf as a box of rocks. I can’t take him. The bulls would cow kill him if he can’t hear them. How would I tell him what to do?”

“Well, what am I going to do with him? I adopted George…you know, the cat, and he hates him.”

“I don’t know, Mom. Maybe they can find another home for him.”

I called the shelter and told them I can’t take George. Gage is already attached (and so am I to be honest) and I’m certainly not taking him back. The shelter was dumbfounded. They didn’t know Gage was deaf either. They shelter already had a family who wanted George, so all ended well, except you know all the cat stuff.

I took it to the shelter and told them it’s brand new. Never been used. The little volunteer looked at me sadly. It’s like a Hemingway story. “Oh, I’m sorry. Do you mind me asking what happened?”

“No, not at all. So there I was, thinking about getting a cat—”

You know what. On second thought, don’t take advice from me on how to adopt a cat.