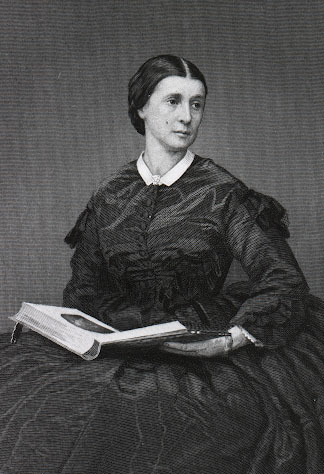 G is for Greenhow.

I’m determined to catch up today. Rawr, go me.

Rose O’Neale Greenhow is most likely the best-known spy of the Civil War, though I’m not sure the most effective. There was one who operated deep in the Washington machinery who regularly fed information to the south throughout the war. His true identity is not known to this day. Rebel Rose as she was known, made no attempt to hide her secessionist leanings and loyalty all the time she was in Washington. It’s surprising she was as successful as she was as a spy, but this was an unusual woman and men will forgive much to a charming, intelligent, and most of all, beautiful woman.

Born Maria Rosetta O’Neale on a small in Montgomery County (probably Port Tobacco) Maryland in variously 1813-1817 depending on which historian, she was the third of five daughters. In 1817, the father was murdered by his black valet, leaving Eliza O’Neal (they had dropped the final e off the name by then) with four daughters and a cash-poor farm.

Mrs. Maria Ann Hill took in Ellen, an older sister, and Rose to live with her in her stylish Washington, DC boarding house in 1830. The boarding house was the Old Capitol building that had been built to hold Congress after the British burned the original capitol down during the War of 1812. Thus the die was cast.

All of the important Washington personages stayed at Mrs. Hill’s boarding house when they were in town as well as visiting dignitaries. Some lived there permanently. Rose became close friends with John C. Calhoun and President James Buchanan. She remained friend with Dolley Madison all her life and petitioned Congress for a pension for the former first lady who was living in near poverty. Dolley got her pension allowing her some small measure of dignity in her declining years.

Some called O’Neal Wild Rose for the way her olive complexion flushed delicately pink. The nickname was more appropriate than they realized when she earned it as a youngster.

Though courted by just about every eligible and probably quite a few ineligible men in Washington, she met a prominent doctor, lawyer, and linguist from Virginia in the 1830’s who held her quick mind and heart. Rose had grown up with conversations about politics, foreign policy, and everything Washington and the world had to offer at her dinner table. She absorbed it all eagerly and participated frequently in the discussions. No child could have had a better education and she could settle for no less than an equally exciting mind to be yoked with. In 1835 Greenhow and Rose married.

The Greenhow’s had four daughters who lived and eight children in all, Florence, Gertrude, Leila, and Rose. Little Rose as she was known was Rose O’Neal Greenhow and was born in 1853. Robert Greenhow worked for the State Department, forcing the family to move to Mexico City in 1850 and then San Francisco, California. Rose picked up the language and customs easily and was just as popular in Mexico City as she had been in the Washington social circles. She wasn’t quite as popular in San Francisco where the wives of local politicians could barely control their jealousy and went out of their way to make her life miserable. She was above such pettiness and carried on as she always had, immersing herself in the intriguing work of her husband.

She returned to Washington in 1852, the journey taking several months and gave birth to Little Rose in 1853. Robert was expected to follow them, but was killed in an accident in 1854 leaving her a widow. Shortly after that, their eldest daughter married a West Point graduate and US army officer.

Rose was called to testify in the Linmantour Land case, which was a multi-million dollar affair over false land grants. Reporters and spectators jammed the court to get a look at the society dame defending the French claimant.

Since there had been much speculation about her age, she was variously guessed between seventy and thirty, many people were anxious to hear her swearing in. The lawyer asked her to state her name, place of residence, and age. Most people honestly said she looked closer to thirty than her true age.

She held her head high and smiled. “My name is Rose O’Neal Greenhow, and I reside in Washington City, District of Columbia. I am of lawful age.”

No one challenged her, much to the chagrin of the women who thought they would finally learn the truth.

Back in Washington, the country was coming to war in spite of all efforts to avoid it. The peace convention failed. Thomas Jordan knew it was coming and started building a spy ring for the Confederacy at least a year and probably two years before the actual outbreak. He recruited Rose, though he didn’t entirely trust her. She was too impetuous and outspoken to be an effective spy.

Rose took on her new mission with gusto, but refused to temper her demeanor or remarks in public. Though some people stopped visiting her dinners quite so frequently, there was no shortage of men ready to pay her court privately.

She proved her worth when she sent Betty Duvall out in disguise with a message for General Beauregard. McDowell’s army was moving to attack. Betty arrived at General Bonham’s camp at Fairfax Court House, Virginia and demanded to see the general. The pickets initially refused entrance as so many young ladies had been riding up with information, most of it false, that he didn’t want to be bothered with more of it. She finally told them if they would not see her, General Beauregard would and she’d ride to Manassas.

At his headquarters, she took out her tucking combs and according to Bonham, the most beautiful roll of dark hair he had ever seen fell down to her knees. She had a small message tied in her hair about the size of a silver dollar and written in cipher. Bonham barely escaped ahead of McDowell.

Jordan put more faith in Greenhow after that as much of the information she got out did help in the First Battle of Manassas. Unfortunately, Rose kept a list of her operatives and other damning information in her house that would later be enough to hold her in prison. She was smart enough to send her daughter Leila to live with her oldest daughter where she would be safe and kept only Little Rose with her.

She continued her spying operations until August 23, 1861, when Pinkerton arrested Greenhow and placed her under house arrest at her 16th Street residence. Rose tossed one message in a gutter as she neared her house and ate another one so it wouldn’t be found on her. She recognized trouble standing on her front stoop waiting for her, but was powerless to stop them.

“Is this Mrs. Greenhow?” Pinkerton asked when she arrived at her house.

“I have come to arrest you.” He was wearing his officer’s uniform in his guise as Major Allen.

She took out a handkerchief and wiped her cheek. It was a signal to an approaching spy not to come closer. “Let me see your warrant.”

Pinkerton continued, demanding she comply. He placed two men on either side of her to prevent her escape. She looked down the street to see that her signal had been understood and leveled a cold glare on him. “I have no power to resist you, but had I been in my house, I would have killed one of you before I submitted to this illegal process.”

It took sufficient time to get the child out of the tree for word to spread far and wide.

Rose was held in her house, which became known as Fort Greenhow when they started placing more Confederate spies there. She still continued to get messages out, but was highly compromised and  Jordan disregarded most messages coming from her ring as he knew Pinkerton was planting false information.

Newspapers whipped up a frenzy about her lenient punishment for spying and she was transferred to Old Capitol Prison, oddly enough her Aunt’s old boarding house that had fallen on hard times. There, entered a new phase of imprisonment with Little Rose on January 18, 1862.

Rose called for a public trial where she would reveal all. That’s the last thing Washington wanted. Generals, congressmen, every layer of the powerful of Washington had graced her arm and more most likely. Rose had not managed to destroy a stash of love letters from one influential and very married senator before her house was searched. An officer said southern women should all be imprisoned and kept guard by aging crones who were impervious to their charms. He had been one of Rose’s early admirers.

Living at Old Capitol didn’t dampen her ardor much. At one point, she flew a Confederate flag from her window.

On May 31, 1862, Greenhow was released along with Little Rose, on condition she stay within Confederate boundaries and never return. Rose had eight children in Washington. Three survived. It was home to her. It was where her greatest glories and fondest memories lay. It was a city she loved even though she was at war with it.

Rose then went to Europe where she wrote her memoir My Imprisonment and the First Year of Abolition Rule at Washington two months after arriving in London. In her diary she wrote, August 5, 1863, to August 10, 1864, when she wrote, “A sad sick feeling crept over me, of parting perhaps forever, from many dear to me…A few months before I had landed a stranger–I will not say in a foreign land–for it was the land of my ancestors–and many memories twined around my heart when my feet touched the shores of Merry England–but I was literally a stranger in the land of my fathers and a feeling of cold isolation was upon me.”

She traveled through France, and Britain on behalf of the Confederacy and was very well received even by the aristocracy including Queen Victoria. In 1864 she became engaged to Granville Leveson-Gower, 2nd Earl Granville. She would make one last trip to Richmond and begin her new life.

On October 1, 1864, the British blockade runner the Condor ran aground at the mouth of the Cape Fear River at Wilmington, North Carolina while being chased by the Union gunboat USS Niphon. Fearing capture, Rose insisted she be put ashore by rowboat. A wave capsized the boat. Weighed down by gold she had sewn into her underwear and put in a bag around her neck, money she had earned from her memoir, she drowned. Her last mission and hopes to help the Confederacy were at an end.

They found a note to her daughter, Little Rose inside a notebook she carried. She was honored with a military funeral.

Stealing Secrets: How a Few Daring Women Deceived Generals, Impacted Battles, and Altered the Course of the Civil War by H. Donald Winkler

The Spy of the Rebellion by Allan Pinkerton