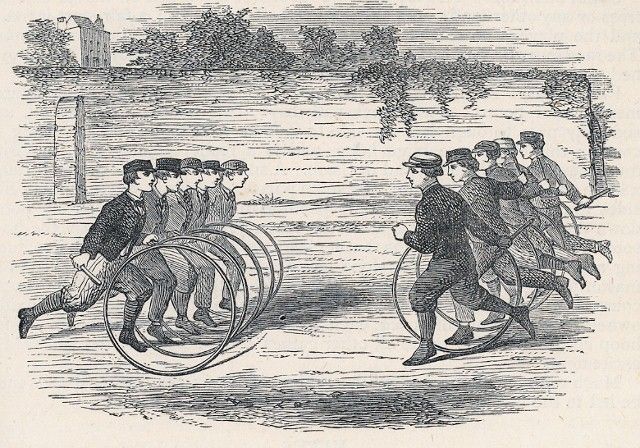 Well, let’s try this again. I opened up the file to finish it and it was gibberish as in completely unreadable. I have no idea what happened.

F is for Fox and Geese. It was a board game played by adult and child alike during the Civil War. One marker was the fox. The others were geese. The object of the games was with a series of jumps to either box the fox in on four sides so he couldn’t move or to get down to four geese, whereupon the fox wins. It’s a classic game of strategy. It’s sort of like those wooden triangles with the golf tees at Cracker Barrel that drive you crazy so you have to buy one to take home.

Soldiers have always played a hurry up and wait game. Since Lorena, the main character in The Rain Crow, operates a boarding school for young ladies at Rosemount and soldiers had to deal with boredom, I went down the rabbit hole of what some of the favorite games of the time were.

For adults, it would have been a lot of card games. Whist, euchre, poker, vingtetun, and quadrille were popular. Most commanders frowned on gambling as that created hard feelings and fights, but it was hard to control the competitive spirit in so large a group of men. They bet on everything, foot races, horse races, even louse races. Yes, louse races, we’ll discuss it later. I know you can’t wait.

Checkers, cribbage boards, and dominoes were convenient enough to carry with a soldier and helped pass many a tedious hour. A few of the officers even kept their chess sets handy.

The men also played baseball. One Union POW in a Texas prison wrote home about a game they played between the Yanks and Rebels and wished all differences could be settled with a ball game. The commander was later ordered to kill the prisoners as they were out of food and none was expected to reach them. He refused to do it and instead marched the prisoners out to a new location. Along the way they found an abandoned farm with a root cellar that had food. A soldier shot a wild steer and so they had an early Christmas feast. When they reached their destination, the commander told them he would buy stamps for letters if anyone wished to write home. The Union officer spent the day writing letters for illiterate soldiers, Union and Rebel alike. They would play more ball before the war was over.

Game of the Great Exhibition of 1851 showed just how beautiful and educational a board game could be.

Board games had been in use for a while, but for the children, they were mostly morality games such as the Mansion of Happiness. Milton Bradley came up with a new game that was a little more fun in 1860 called the Checkered Game of Life.

Lincoln, consarned him, had nearly destroyed Bradley the year before when he took the advice of a little boy who thought he would look better with a beard and grew his beard out. Bradley had printed off a large quantity of the little-known Republican candidate without a beard. They were initially very popular, but when a customer demanded his money back because the lithograph no longer looked like Lincoln, Bradley was undone and he burned the remaining copies.

Fortunately, his game did better and was an instant success.

Children spent a lot of time outdoors. Boys played with hoops. Rolling a hoop with a stick is more difficult than you think and kept them well occupied. Skittles or nine pins was an outdoor bowling game. Scotch-hopper (hop scotch) was also popular. Quoits was a ring toss game. Marbles were in high demand. Poorer children played with clay marbles while more wealthy ones might have real marble or glass marbles.

There were also the indoor toys: soldiers, dolls, tops, cup and ball, cast iron toys and wind up trains. There were a lot of homemade wooden toys such as whirlygig and Jacob’s Ladder.

Reading was a universal pastime for both adult and child. If a man couldn’t get a bible in camp the American Bible Society would help. By the end of the war, they had given out 5,297,832 bibles. Soldiers also wrote when they could or kept journals and thank God for that.

Lorena has two darling little girls at Rosemount names Persy (short for Persephone) and Lucy. Persy and Lucy are hell on wheels.  What one can’t think of, the other does. One day when they’re all in town shopping, Persy and Lucy disappear. Lorena finds them in an alley engaged in a lucrative marble game that has gone awry.

We talked about the school and some of our star pupils and our not so star pupils, namely Lucille and Persy.

“I’m sure the little girls are not that bad,” Shoemaker said in his very proper upper-crust Boston accent. “I’ve never met a southern girl who wasn’t truly a delicate flower. I confess, I’m smitten.”

Imogene leaned back to allow the server to set her plate, but I caught the roll of her eyes.

I sliced through the seared ham steak on my plate and contemplated Lucille and Persy. “Yes, delicate flowers.” I swallowed the juicy bite and asked Shoemaker if he’d ever played marbles as a boy.

“I surely did,” he replied proudly. “Used to beat everyone around my neighborhood. I had two jars of marbles I’d won.”

“The last time we went to town with all the girls, Persy and Lucille disappeared. We finally found them behind a billiard hall shooting marbles with a bunch of boys. The girls had pretty well skunked the boys, but Persy especially had made a nice haul. I was just closing in on her when one of the boys lost his marble. He jumped up and accused her of cheating, then threatened to whup her if she didn’t give his marbles back. She dropped the marble in the bag, which was filled near to bursting, and hit him in the eye with it.

“I was sure he was about to trounce her, being a full head taller than her and the two girls being surrounded by half a dozen local boys. He doubled up his fists, but she popped him in the nose and bloodied it before he could blink. The other boys were so dumbfounded they didn’t know what to do.

“His wail brought Mama and Daddy running. She insisted I punish my little hooligan immediately.”

The table erupted in laughter. “Did you punish your delicate flower?” Shoemaker asked.

“Daddy said, ‘Actually, Flora, I believe I am going to tan his hide for fighting with a little girl and especially for getting whipped by her.’ That seemed to end the conversation about my hooligan being punished. Daddy made the boy apologize to Persy, who decided to give him back his prize marble, but refused to part with the rest, they being the spoils of victory.”

The soldiers raised their cups. “Hear, hear. To Persy!”