Some years ago, I got a call from my oldest son Brandon’s roommate. They had been to a bullriding practice and Brandon hung up to the bull and the bull stepped on Brandon’s stomach every time the hind feet came down. Brandon was wearing a protective vest, but the force tore out the zipper so he was taking the full force. 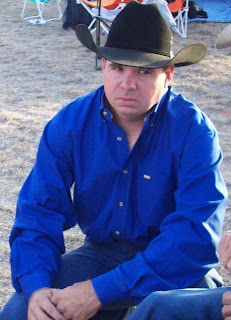 Brandon refused to go to the hospital in Andrews. He had his roommate drive him home and then lay on the floor in his bedroom puking his guts up. Kyle called me and told me Brandon wasn’t in good shape and asked me to come over four hours after the accident.
When I arrived, Brandon’s stomach looked like he was five months pregnant and it was the color of an eggplant. I told Brandon he had to get to a hospital and told Kyle to call an ambulance. Brandon refused and insisted I drive him to in. I wasn’t happy about it, but he was adamant and I didn’t think we had time to waste arguing. Brandon pulled on his boots and put his hat on. Yes, with his gut that messed up, he wasn’t leaving without his boots. I told Kyle which hospital I was taking him to and he had to call and let them know we were on the way. They needed to know what happened and call a surgical team in, plus I wanted them waiting at the door when we got there. I also told him to call the police and tell them I was on the way in and see if they could catch me to give me an escort. Any other time, I would have been picked up in a New York minute for speeding and running red lights.
I took the fastest route to the hospital, checked the intersections and ran the red lights if there wasn’t any traffic. I prayed all the way for God to shield us and anyone in our way and to keep Brandon alive.
Kyle, for once, did exactly what he was supposed to do and the hospital had a crew waiting at the door when I zipped into the emergency entrance. I parked the car and ran back into the hospital to stay with Brandon until they took him back to surgery.
He was covered with sweat, but he felt cold to me. I held his hand and prayed with him. I kept it under control, but he knew I was afraid.
“Mom, don’t worry. Me and God are good. I want you to promise me. If I die, you can’t hate rodeo. I was doing what I love and how many people get to do what they love?”
I promised him, but I’m not sure I could have kept it.
The surgical teams were arriving, but I wasn’t sure it was in time. He was going into shock and I saw the light going out of his eyes. I’ve seen things die before and I recognize death.
There’s a lot more to the story, but Brandon did make it.
That brings me to another point and it’s related to writing.
I’ve been studying agents and agencies lately and a few things have become obvious.
The agencies who say they want fantasy want urban fantasy, YA fantasy, paranormal or dark fantasy. I’d go through and pull some stats, but I’m not really that anal right now to “prove” my point. It’s an observation that I think most people will recognize when they research agents.
I like FAR RIDER. I think it’s the best I’ve ever written, as it should be. If a writer isn’t improving with each effort, they are stagnating. That being said, SONG OF ILWEN, my mystery-solving elf fantasy, will be much better than it is, but I don’t think it will ever have the depth of FAR RIDER. It has some very dark places in it, but it’s a lighter read. DRAGON VALLEY, on the other hand, is deeper, like FR. It has a richer story and borders on the romantic, though I would never call it a romance. I’m not sure I have what it takes to write a romance and wouldn’t even try.
Everything comes in cycles. If epic fantasy doesn’t sell now, perhaps it will again in ten years. So, do you write what you love so when the next cycle comes around you’re ahead of the game? Do you shelve what you love and write something “safer?”
I think I could probably find a home for DANCING HORSES, my cowboy suspense, if Will can rescue it off the crashed computer. It was completely finished and with an agent before the computer disaster. Suffice to say a series of unfortunate incidents means the only hope is rescuing the hard drive. I have seventeen chapters rewritten, but I just don’t think I have the heart right now to finish it. I’ve already written it once and revised it twice. I don’t feel like starting over.
Most agents tell you not to try and write to a trend. By the time you get an agent, revise umpteen times, sell it, revise it more, publish it and actually get it on the shelves, there may be a whole new trend.
What’s the answer?
I have no idea, but I think Brandon had it right those many years ago. How many people get to do what they love? In the end, I think I must write what I love. It might not sell. I might have to abandon fantasy at some point, but for now, I’m going to dance with magic.