I think it’s a good thing to look back over an event and assess it, good or bad. So it is with 2009.

It was a year of great peaks and valleys.

Will was in Iraq. The base that was supposed to be one of the safest in the country and had no attacks the previous year, reversed fortunes. His sergeant told me not to worry before they left. The base was safe and Will was going to be his shadow. Part way through the year, they pulled off most of the Marines who had been doing security and sent them to Afghanistan. The roads the convoys took were no longer regularly patrolled.

Then the decision was made to avoid taking the convoys through the villages so they didn’t inconvenience the natives. This is part of our “let’s impress the world with how thoughtful we are” campaign. The convoys were rerouted on remote roads with no security. I asked Will what they were going to do with the Marines gone and traveling these new routes. 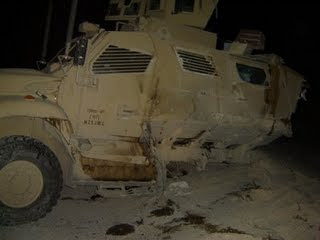 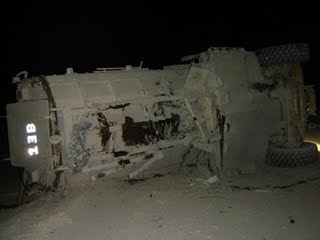 He sent me this picture of an attack. He didn’t tell me about the others, including one just outside the camp when some insurgents blew themselves up while planting a bomb on the main road just outside the walls.

It was a year of heavy prayer.

He got to come home in June for leave and had the worst possible welcome waiting for him. He hadn’t planned on coming to Texas as he wanted to spend as much time with Katie and the baby as possible, but he wound up coming home for a few days.

I was very concerned when he went back to Iraq that he wouldn’t stay focused on his job and Iraq isn’t a good place to let your attention drift.

Although his unit suffered no casualties, the unit replacing them lost a man on their first convoy.

He came home safe and sound. In September, he went back to Wisconsin for Little Man’s birthday and brought him back to Texas. He filed for divorce and full custody of the baby.

He was supposed to be on active duty until March 15, which would give him a chance to save up some money and go to school. They split his orders in two so they wouldn’t have to pay a housing allowance and then lost the second orders, so he was out of work December 15. Since the paperwork didn’t get filed in time, there is nothing that can be done even though they admit he was supposed to be active until March 15.

He decided to start school in January and paid the portion of tuition he had to pay. Unfortunately, there is some hold up with the GI bill and it hasn’t come through so he may not be starting school.
For all the screw ups, he is safe at home with Little Man and that is the greatest blessing.

The divorce from hell was over on May 13 after nearly two years.

I received a retroactive raise, which paid for my writing jaunts. I argued with my former boss I had been guaranteed a raise of this amount after a year and he said I was mistaken. Corporate caught the mistake and sent me a lump sum. That was a blessing.

I went to a writer’s retreat in Myrtle Beach and it was awesome. Being around good friends and talented writers is the best way to get your creative juices flowing. I actually got quite a bit of work done on my book.

Jo Bourne torturing her MC and taking great delight in it.

Beth Shope, who is destined for greatness, kindly offered to read Paladin. She pointed out some good things such as dialogue and memorable characters, but I had some serious plot problems from cutting 35,000 words.

I had to go back and outline the story, cut POV characters and completely rewrite it. It was a totally different story at the end and much better for it. I think blood sacrifices do make a difference and I was sweating blood and shedding many tears over that mess. Some of my favorite characters and scenes fell by the wayside, but they may return in a second book.

By the end of the year, I had the manuscript finished, a new query, a new title and a synopsis. I sent it off January 1st.

The Gnomies, as we call our writing group, went to the Rocky Mountain Fiction Writer’s conference in Denver. It was the most fun I have had in a long time and some of the workshops were excellent.

The night before the conference, we met Rachelle Gardner and had dinner with her. She is truly as sweet as she seems.

I spent my birthday surrounded by friends and enjoyed my first birthday party ever. I cried.

We stayed in Evergreen at a lovely house after the conference and digested some things we learned at the workshops. Deleyna helped me use one of Margie Lawson’s methods for mapping out your chapters and getting a visual of where things slow down and how to balance the arc. Margie Lawson’s lessons and workshops are wonderful if you ever get a chance to take one.

Deleyna was in the den one morning watching a fox play with a tennis ball on the tennis court. It tossed the ball and chased it for a long time, then finally trotted off into the forest with the ball. How much more relaxing can life get?

Stephanie, another Gnomie who lives in Evergreen had a lovely dinner for us one night. She even had a kilt boy waiting to entertain us. Her little terrier looked adorable in his kilt. At the end of our retreat, we went out to dinner at a restaurant in Evergreen that is owned by two Czech brothers. I may be wrong on that, but I think they were Czech. The one who escorted us back to the private room kept flirting and making remarks about how he was going to entertain seven beautiful women by himself. He might need more vitamins. His brother offered to help. Yes, it was quite a show and the food was excellent.

I’m hoping to be able to rent a trailer soon where I will have more room and a bedroom we can set up for him so he will have his own space. It will be a little cheaper, more room and 14 acres. That is definitely in prayer. There was one man killed in these apartments and another shot a few weeks later. On top of that, there is a group of car thieves at work here who are using slim jims to break into cars. Management says they are jumping the fence to get into the complex. I think it’s someone who lives here.

2009 was definitely a roller coaster, but God is good and I am thankful for my blessings. Little Man is a doll. I get to watch him every now and then and he is a joy.